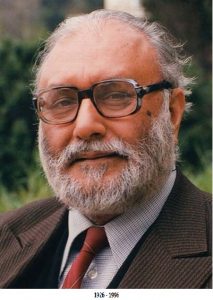 Professor Abdus Salam was the first Pakistani and the first Muslim scientist to win a Nobel Prize. He was awarded the Nobel Prize for Physics in 1979, for his theoretical unification of the two fundamental forces of nature

He was born on Jan 1926 in Jhang (Punjab) in Pakistan. Salam attended the Government College at Lahore and in 1952 he received his Ph.D. in theoretical physics from the University of Cambridge. He returned to Pakistan as a professor of mathematics in 1951–54 and then went back to Cambridge as a lecturer in mathematics. He became professor of theoretical physics at the Imperial College of Science and Technology, London, in 1957

He established the International Center for Theoretical Physics (ICTP) at Trieste Italy: a knowledge hub for the scientists around the globe in the area of Physics and mathematics

Founded in 1964 by the late Nobel Laureate Abdus Salam, ICTP seeks to accomplish its mandate by providing scientists from developing countries with the continuing education and skills that they need to enjoy long and productive careers. ICTP has been a major force in stemming the scientific brain drain from the developing world.         www.ictp.it

“The creation of Physics is the shared heritage of all mankind. East and West, North and South have equally participated in it”

“It is good to recall that three centuries ago, around the year 1660, two of the greatest monuments of modern history were erected, one in the West and one in the East; St. Paul’s Cathedral in London and the Taj Mahal in Agra. Between them, the two symbolize, perhaps better than words can describe, the comparative level of architectural technology, the comparative level of craftsmanship and the comparative level of affluence and sophistication the two cultures had attained at that epoch of history. But about the same time there was also created—and this time only in the West—a third monument, a monument still greater in its eventual import for humanity. This was Newton’s Principia, published in 1687. Newton’s work had no counterpart in the India of the Mughals”

“The Holy Quran enjoins us to reflect on the verities of Allah’s created laws of nature; however, that our generation has been privileged to glimpse a part of His design is a bounty and a grace for which I render thanks with a humble heart”

The Nobel Prize in Physics 1979 was awarded jointly to Sheldon Lee Glashow, Abdus Salam and Steven Weinberg “for their contributions to the theory of the unified weak and electromagnetic interaction between elementary particles, including, inter alia, the prediction of the weak neutral current”.